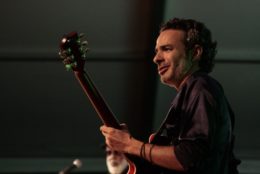 "Gain Over is the perfect choice when I'm touring outside Italy and I just want to have with me that beautiful natural saturation, without effecting my tone on the amp!"

Guitarist, bandleader, singer, and songwriter Luca Giordano has emerged as one of the outstanding talents on the European Blues scene, performing both his own music and backing many of the music’s greatest performers. Born in Italy in 1980, Luca moved to Chicago at the young age of 25 and gained valuable experience working with established Chicago Blues artists like Sharon Lewis, Willie “Big Eye” Smith, Les Getrex, JW Williams, James Wheeler & the Rosa’s Lounge All-Stars, eventually joining the late Eric “Guitar” Davis and his band the Troublemakers. After returning to Europe Luca released two solo CDs (My Kind Of Blues featuring Chris Cain, Bob Stroger, and Sax Gordon for Audacia Records & Off The Grid for GG Records) . In the years, following the Luca Giordano Band, established itself as one of the go-to bands for American Blues artists looking for professional backing in Europe. Successful tours and growing recognition attest to the quality of their work with respected artists such as Sugaray Rayford, John Primer, Bob Stroger, Nora Jean Bruso, Kenny “Blues Boss” Wayne, Willie “Big Eye” Smith, Jimmy Burns, Toni Lynn Washington, Chris Cain, Carlos Johnson, Billy Branch, Eric “Guitar” Davis, and Sax Gordon to name a few. In recent years Luca has also become a mainstay of Blues Prophet Mighty Mo Rodgers’ touring band and is featured on Mo’s new collaboration Griot Blues with African Griot/Musician Baba Sissoko (2017 – One Root Music) while continuing to tour worldwide with both his own band and the best performers on today’s Blues scene.